Clay Fighter Sculptor's Cut is the follow-up to 1997's Clay Fighter 63 1/3, a fighting game starring 2D clay combatants in 3D arenas. This game is notable for being a Blockbuster rental exclusive, meaning it is not available for purchase at retail outlets. While the graphics and overall gameplay remain the same as the original, there are a number of new features that set it apart. For starters, there are now four more fighters, bringing the total number of characters to 16. These new clay warriors include the aforementioned Lockjaw, Lady Liberty (complete with torch and crown), High Five and the Zappa Yow Yow Boyz, three little island natives who fight as one. The twelve original fighters are in the game as well, including famous 16-bit characters Boogerman and Earthworm Jim. Also new to the game are additional character taunts, different moves, an updated combo-system and a camera angle that stays fixed instead of moving around as in the original. 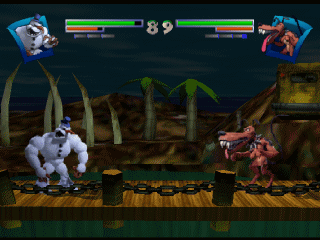