The only man to ever knock Mike Tyson out brings all his power and skill to the Sega Genesis in the form of JAMES "BUSTER" DOUGLAS KNOCKOUT BOXING. You can select from any of five fighters, including "Buster" Douglas himself, each with unique characteristics and attributes. Once you're in the ring, you'll go toe-to-toe with some of the most powerful and skilled pugilists in the business as you fight for your shot at the Heavyweight Championship Belt. Stick and move as you utilize your quickness to land jab after jab, then go for the glory with a devastating hook that your opponent will never see coming. If you're good enough to win the Title, see if you can defend it against a stable of fighters hungry for their chance to step into the ring with the Heavyweight Champion of the World.

This is basically a port of Taito's arcade boxing game Final Blow with the addition of "Buster" Douglas as one of the playable fighters. 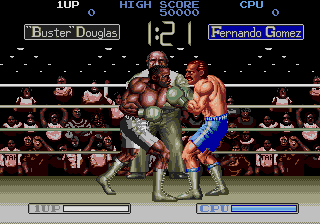