a.k.a. 罪と罰～地球の継承者～ / Sin and Punishment: Successor to the Earth

Created by the legendary development studio Treasure, this is a game that hard-core gamers and fans of Japanese imports recognize as one of the finest Nintendo 64 titles to have never previously reached North American shores. Its unique combination of English voice-overs with Japanese subtitles (preserved in this version) has only added to the enthusiasm for its eventual release here. Experience the frenetic pace of a classic shooter, while choosing from a variety of options and a number of different skill levels until you are ready to take on the full-blown challenge of Turbo Hard mode. Not to be outdone by the action, however, the intriguing story line gives the game its soul and draws you even further into the mix. Set in the near future, on an overpopulated Earth starved for resources, players uncover the intriguing mystery of two teenagers (Saki and Airan) and their battle against the Ruffians as they advance through level after level of nonstop action. Take a deep breath, gather your energy and prepare to see why this game is so highly praised. 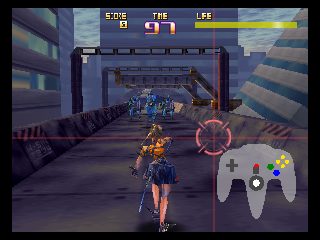