Will Custer get his sweet revenge, or will he get it in the end? You are General Custer. Your Dander's up, your pistol's wavin'. You've set your sights on a ravishing maiden named Revenge; but she's not about to take it lying down, by George! Help is on the way! If you get to Revenge you'll have to rise to the challenge, dodge a tribe of flying arrows and protect your flanks against some downright mean and prickly cactus. But if you can stand pat and last past the stings and arrows - then you can stand last. Remember! Revenge is sweet. Everytime ol' Custer scores he comes up smilin' and comes right back for more. The higher the score, the more challenging the game action gets.

Considered by many to be the worst game ever created. More that just a low quality game, and low quality porn, the plot can only be described as evil. The player directs a nude George Armstrong Custer to repeatedly rape a nude Native American prisoner who is tied to a post. This is not a homebrew hack game. A company set out to design this as a marketable product. Women's rights, anti-pornography, Native American groups, videogame critics, collectors, publishers and historians have universally criticized this game. Several, including Atari, took Mystique to court. Atari lost their case. After Mystique went bankrupt, the rights to all their games went to a company called [[publisher:Playaround]]. Playaround created two 'toned down' versions. In '[[game:Westward Ho]]', CR was redesigned to imply that that the characters were engaged in consensual fantasy sex. In '[[game:General Retreat]]', the Native American references were removed and the characters traded roles. Despite the redesign, Playaround realized that these games were to controversial to publish in North America and opted to try and sell them Europe instead. 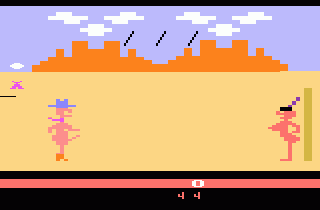