Earth is on the verge of a takeover by aliens intent on turning humans into mindless slave zombies, who can be used in their conquest of the universe. Harry's called into action to Space Station Liberty and given orders to penetrate the alien ship which has burrowed itself under a high-rise city.

In addition to the flamethrower, Harry can use weapon dispensers, giving him access to weapons like the photon cannon, guided missiles, grenades, shields, micro nukes, and the very powerful Omega bomb. It's an arsenal that will have the aliens shakin' in their slimy shoes.

Halloween Harry was the name of the shareware version of this game, but it was changed to Alien Carnage for the commercial version in hopes of getting better sales, but Doom was likely the reason for the poor sales. Shareware version included the first episode as usual. 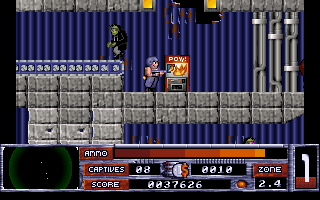