CX26192 (The last number in the catalog of released games). Atari actually provided DeFrisco with the source code for Klax. The Structure of the arcade code was utilized for this 'port'. This game is as close to an actual coin-op port as the VCS can muster. Released only in PAL format in Europe. 10 NTSC prototypes have been found. 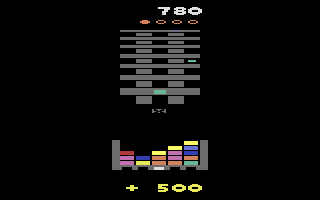