WWF Attitude is the smash follow up to WWF War Zone; the #1 Sports title for 1998! Over 40 of your favorite WWF Superstars like The Rock, Stone Cold Steve Austin, The Undertaker, D-Generation X, Mankind, Kane, Val Venis, Ken Shamrock, Al Snow, Sable and many more are featured on this game! First ever Create Your Own Pay Per View Mode: Select 8 wrestler matches, Title Belts on the line, Specialty Matches and Authentic WWF Special Events, over 20 Game modes including all new Specialty Matches: LumberJack, Survivor Series, Triple Threat and King of the Ring, all new options include: First Blood, I Quit, 2 out of 3 falls, Iron Man, Tornado, Hard Core, Last Man Standing, Steel Cage and Weapons. Wrestle a full WWF season in all new Career mode: House shows to TV tapings like Monday Night Raw to the ultimate Pay Per View Event: Wrestlemania! With the All-New Create-a-Wrestler Options you can customize your wrestler's move sets by selecting moves from your favorite superstars. You can create your own costume including custom text on T-Shirts, trunks and jackets. Comes with All-New facial characteristics and custom theme songs. Action features include photo realistic polygonal wrestlers with real-life faces and 3-D environments, all-new motion captured maneuvers by the premiere talent in the WWF, over 400 moves including signature moves for each wrestler, trademark finishing moves and taunts unique to each wrestler, 2 man commentary featuring Shane McMahon and Jerry "The King" Lawler, training mode: practice maneuvers before you take on your opponent, surprise your opponents with all-new weapons (and some old favorites) including Vince McMahon's bedpan, baseball bat, shovel, TV monitor and more, and special cheats and codes.

# 2013-11-28 18:19:16 - official description
Take part in the spectacle and brutality of professional wrestling in WWF Attitude. You'll be able to lead one of over 40 of the WWF's top wrestlers to the championship belt. Featuring both a deep create-a-wrestler mode, as well as a create-a-pay-per-view mode you'll be playing Attitude for hours. Each wrestler has dozens of moves that you can pull off, including each of the wrestlers own signature moves. 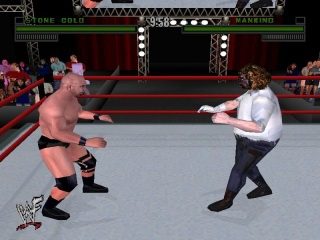