Capcom vs. SNK Pro enlists a host of characters, more than 30 in all, from Capcom's Street Fighter line and SNK's King of Fighters series. The game features two different fighting styles and various modes of play. You can set up dream matches like Ryu vs. Kyo or Zangief vs. Raiden. The two fighting styles are Capcom Groove--based on the Street Fighter Alpha series, with a Super Combo Level Gauge--and SNK Groove--based on the King of Fighters series, with a Super Special Move once the Extra Gauge has reached its limit (if a player's vitality is very low, an enhanced version of the Super Special Move is available, giving players a chance to turn the tide). The number of characters in a team varies depending on the character's strength level, which ranges from one to four. The final team will have a total level of four. Modes of play include arcade mode, versus mode, training mode, and color edit mode.

# 2015-04-13 17:52:26 - official description
Two monster corporations at war. One solution. A massive martial arts event is organized to settle the score and eliminate all conflict between the two parties. Many of the world's most famous warriors have joined and the public is going mad with anticipation. Join over 30 brawlers from Capcom's legendary Street Fighter and SNK's world-renowned King of Fighters series' as they fight for universal domination. Capcom vs. SNK Pro...the ultimate collision of strength and power. 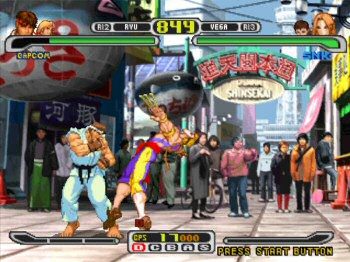