The direct sequel to the spectacular Puzzle-based PC (and PlayStation in Japan) claymation game, The Neverhood, is the side-scrolling platformer Skullmonkeys (aka Klaymen Klaymen 2). Skullmonkeys continues where The Neverhood left off, featuring the villainous Klogg plummet through space, landing on Planet Idznak, home of the titalur Skullmonkeys. Without missing a beat, Klogg assumes command of the rather dim-witted apes and reveals his plan of destroying the Eden-like Neverhood with a deadly weapon called Evil Engine #9. Jerry-O, an intelligent Skullmonkey, sends a gizmo to the Neverhood to seek help. The gizmo happens to come across Klaymen, the hero of the previous game, and immediatly whisks him away back to Idznak to the aid of Jerry-O and the inhabitants of the Neverhood. Upon arriving, Klaymen must fight his way through legions of various Skullmonkeys to find Klogg and stop him before his weapon can be unleashed upon his home.

Released in 1998, Skullmonkeys follows the style of it's predicesor, a world made entirely of clay and animated stop motion style every step of the way. It is practically impossible not to enjoy the cutscenes and character animation in this title; The Neverhood, Inc. don't hold back on the slapstick and toilet humour when dealing out Klaymen's mini in-between mission adventures. Including a deadly fart (the result of eating an entire tin of baked beans), an encounter with a giant insect brandishing a sandwich and what happens when a hamster meets an unfortunate Skullmonkey.

A single player game, the player takes control of Klaymen and must navigate through each level to the clay teleportation ball at the end. To hamper the clay protagonist, the player must avoid falls, spikes, fire, electricity, not to mention the Skullmonkey army, with each different skullmonkey offering a new way of dispatching poor Klaymen. Such as the 'Tempest Pulsating Monkey', an ape with a bad case of spontainious combustion, 'El Barfo', skullmonkeys which vomit themselves out of their own skin and the 'Clay Keepers' which reward the player with a Klay ball if the skullmonkey is dispatched, collecting 100 of these klay balls will earn Klaymen an extra life.

With Skullmonkeys comes inevitable criticism, however. The game was rather infamous for it's difficulty in some places, making it hard to complete, and with Klaymen being killed with a single hit from an enemy get's incredibly frustrating after a while. Whereas the majority of enemies can be killed simply by jumping on them, some enemies are immune to this attack, instead resulting in Klaymen's own demise, forcing the player to either dodge the enemy entirely, or use an actual weapon. Although the weapon selection in this game is widely varied, with the homing 'Phoenix Hands', the powerful 'Universe Enema' and the 'Phart Head' which creates a clone of Klaymen who can scout ahead and clear a path for the player, several levels deprive the player of these much needed tools and Klaymen must rely on luck and very tight gaps in the enemy's movement to squeeze past.

While the level designs are all beautifully designed looks-wise, some of the layouts can be downright annoying. Such as foreground scenery, which, although adding depth to the level, becomes irritating when it hides traps and enemies, the player only realising the threat is there when it's too late. To ease the difficulty of some of the longer levels, checkpoints under the guise of 'Ma Birds' (amusing plant-like birds which caw "MA!" when activated) are positioned in case the player falls ill of an enemy or trap. Although useful, they are thinnly distributed in some particularly difficult or long levels, which can make any player almost scream with frustration as they realise they have to start from the beginning again. The game is played by Klaymen traveling through a zone, such as the 'Science Center', the 'Skullmonkeys Brand Hot Dog Factory' and the 'Worm Graveyard', each zone containing between two and five levels. This can become fairly boring, especially when a zone has around five levels to it, as the set up doesn't always drastically change and the scenery stays pretty much the same. Another thing to nit-pick at is the Boss fights. Skullmonkeys has one of the most diverse boss selections of any game I've played, although with this game you musn't judge a boss by it's looks. The first Boss, for instance, is possibly the easiest boss in game history. The level deposits you on a ledge out of the Boss's reach, and it requires just three hits to kill it. This, boss, however, is made up by the second boss, the utterly bizarre 'Joe-Head-Joe', which is a skullmonkey in the form of a giant black man's head, who coughs fire and rolls his eyes at Klaymen. The last boss, Klogg, is also a let down. Although an interesting boss-fight, Klogg is far too easy to take-out, being the last boss of the game he should have had a better level for himself. The two other bosses are interesting characters, wit hthe Klaymen fighting them in interesting situations, though a little on the easy side to defeat. I'll end my ciritcism on the holographic platforms found in the last levels as being probably the most infuriating featues within the game. Jumping on what look like giant lightbulbs activate hovering holographic platforms, which as soon as the player leaves the lightbulb, are then on a timed deactivation, meaning the player must be as quick as hell to avoid plummeting to their death...over and over again...It's even worse when rows of these platforms are activated one after the other, resulting in a criss-crossing of platforms which could time-out at any given moment.

If you're wondering "Is this a good game for me?" it really depends on what you want. If you're more used to diverse and technologically advanced side-scrolling platformers, you may want to give Skullmonkeys a miss, as it doesn't break many boundries and the platforming set-up is basically been seen before. Not to say it's a bad game, as the utter uniquness of it makes up for almost all of it's flaws. The humour, the characters, the look, the animation and the overall charm covers the game for everything bad I've said about it, the fact that it's a rare game today makes it highly saught after, so expect to fork out quite a bit for it (if you can find it at all). I played the demo of The Neverhood when it first came out and remember reading about Skullmonkeys in a computer magazine, so I've been waiting practically ten years to finally play this game, so you may say my review could be biased. Although I tried hard not to be, I try to review the game as neutral as possible, taking my own opinions into account. I personally love this game, it really depends on you, you either like it or you don't. I do. 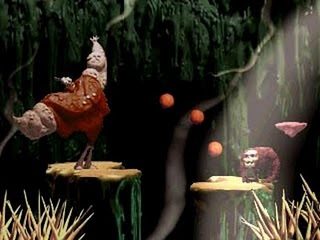