Hit the neon streets of Need for Speed Underground Rivals in pursuit oftotal ownership of the tuner racing scene. In this first-ever Need for Speed title for the PSP, customize and build the ultimate tuner on four rims then take it into the underground world of street racing. With tons of tuning options, a variety of game modes, and the circuit's most sought-after cars, Need for Speed Underground Rivals delivers an unrivaled tuner experience... in the palm of your hand.
Features:
* Build the Ultimate Tuner - Customize up to twenty high-performance tuner cars then hit the streets to see who rules the underground.
* Exclusive PSP Circuits - Accelerate to top speeds on ten visually distinct circuit tracks exclusive to the PlayStation Portable.
* Eight Game Modes - Including Drift Attack, Nitrous Run, Rally Relay, and Car Spec.
* Go for a Spin - Anytime, Anywhere - Engage in two-player head-to-head battles via Wi-Fi or challenge up to four rivals on one PSP device in Party Play.
* Pocket Trax - Listen to music or watch videos on the go with this exclusive new feature for the PSP. 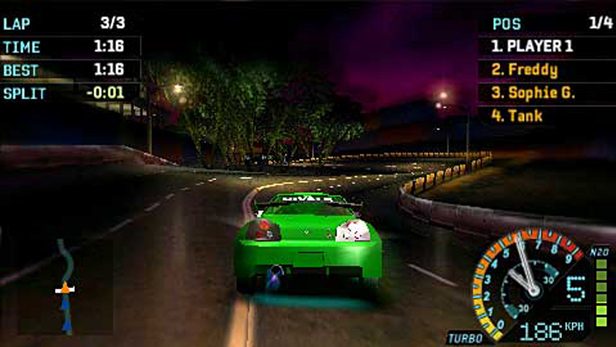