Phantasy Star Ø takes place on an alternate Earth 200 years after the Great Blank, a massive war that has reduced the once-prosperous civilization to almost nothing. The sole surviving Humans have worked hard to exist peacefully and have built thriving Cities. The Humans that adventure past the outskirts of these Cities, called Hunters, explore the vast wilderness and hunt dangerous monsters to keep Cities safe. Players will take up the role of Hunters and select from three types of races and different classes, as well as gender for a total of 14 customizable character types. Each character type will play very differently and give players access to a great range of items, armor and weapons. Featuring over 350 unique weapons, gamers will venture out on Earth, combat dangerous monsters to gain experience and meet new major characters. As players explore further, they will unravel the mystery of the Great Blank and discover a dangerous new force that must be stopped. Featuring both wireless and full Wi-Fi multiplayer options, Phantasy Star Ø takes advantage of the touch screen capabilities of Nintendo DS with the new Visual Chat feature. Gamers can now design their own Visual Chat commands that can be used in multiplayer modes. These Visual Chat commands will be displayed as text bubbles above the user’s character, enabling easy and fun communication when adventuring with friends. 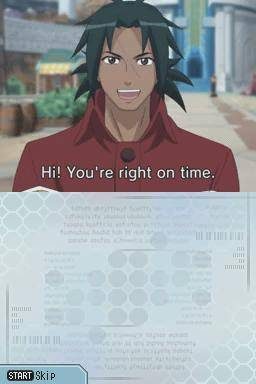