"Mirai Shinwa Jarvas" is an Action-RPG in a similar fashion as the better known Hydlide or Ys games. The game is considered to be rather bad and thats right. It makes many things wrong. The fighting is nearly unplayable, the world is large and empty, talking to NPCs is hard to undertake because of the bad menu-system and I always thought the game leaves me alone about what to actually do. I think it is about gathering fame and soldiers and finally conquering castles. Sounds interesting, but I only felt like being in a big overworld not knowing what to do. The graphics are actually a stronger part of the game and the game even feature side-scrolling scenes. I have the impression that Taito tried to offer a lot with this game, but went wrong with the execution of their ideas. Well, it is one of those games that I will possibly play again in the future when a proper walkthrough appears. Maybe my opinion about will change then. 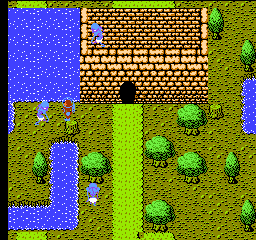