Sometimes the biggest things come in the smallest packages. That's certainly the case with POCKET FIGHTER, a fighting game based on the smash arcade hit, POCKET GEM FIGHTER. Featuring characters from the STREET FIGHTER series, as well as familiar faces from the DARKSTALKERS games, this adventure lets you play as Ryu, Ken, Zangief, Chun-Li, Sakura, Morrigan, Hsien-Ko, Felicia, Tessa, Ibuki, Akuma, or Dan. With 12 separate storylines, the replay value is higher than a helicopter kick.

# 2017-05-29 17:54:36 - official description
Capcom adds a new twist to their traditional 2D fighting genre with Pocket Fighter. In this game you'll play as a pint sized hero from some of Capcom's most successful series. Just because the fighters look small, doesn't mean that they fight small, you'll be able to pull off a ton of special moves and combos with each of them. 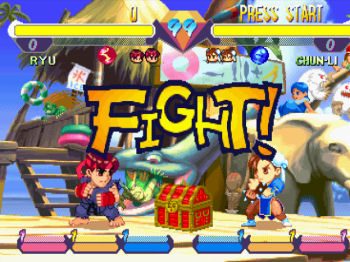