Originally released in 1984, Boulder Dash is one of the big computer-game classics. It is one of the very few computer games ever to be ported from home computers to arcades, not the other way around. The hero of the game is the brave prospector Rockford. He must dig through caves to collect diamonds while avoiding various types of dangerous creatures and obstacles such as falling rocks. He is in constant danger of being crushed or trapped by an avalanche or killed by an underground explosion. Strategy and planning are the keys to mastering Boulder Dash. Once enough jewels have been collected, the door to the mysterious escape tunnel is revealed and Rockford can explore another cave.

has this clone
Epiphany (Linux) 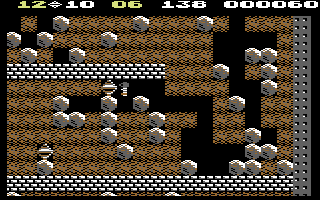