Rally your favorite NFL club. Set up key personnel in formations like Quads, Hippo and Heavy Jumbo. Shift into the shotgun position, find the pocket, then fire downfield to a streaking receiver for six points. Or sweep left in helmet-smashing, rib-cracking gridiron warfare.

On defense, you've a wrecking crew as your Monster Storm set stifles the opposition's passing game. Select your safety, then blitz through the line ans smash the quarterback!

Sharpen your strategy in Exhibition games. Then dive into League action. Slice a path to the Super Bowl calling real NFL plays, like the Skins' Double Tight.

Real digitized players and play-by-play Sports Talk commentary intensify the NFL action. Instant replay lets you relive the close calls and great plays. Pick the ball from the air for a game-saving interception or pound your way through the line for a hard-earned first down. This is all-pro action!

Zoom in on every play as you attempt that impossible touchdown drive.

Strap it up and get in the game with the REAL NFL! 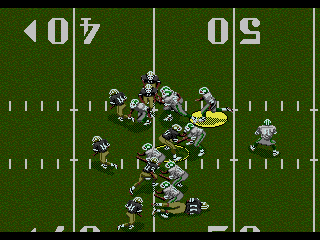