The last DBZ game for SNES, and the better one. It's like a compilation of all the goodies of Super Butoden in only one title. It was a very innovative game, with an awesome battle system, a lot of characters, etc..

# 2006
The graphics in this Dragon Ball Z game are more detailed than previous DBZ games for Super Famicom, but that is really the only main attraction for this game. The characters have very few frames of animation and that was a disappointment for me.
If you've played Street Fighter 2 on SNES, you'll see how this game's fighting engine is very weak in comparison and more tedious.
Overall, this game is not as much fun to play as the 2nd DBZ fighting game for the Super Famicom (I've played all the DBZ fighters), but the music is better and the graphics more detailed.
The gameplay is just not what it could have been and you won't be wanting to play this game often.
Only buy this if you're a serious DBZ collector or fan; or if you can find it cheap. I love the DBZ series, but you're not missing anything if you haven't played this game. 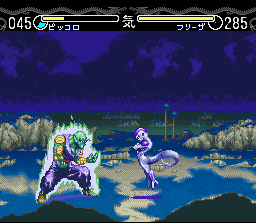