By the year 2140, aliens have taken over intergalactic flight paths, leaving the Federation without a way to get food or water supplies. According to the Intergalactic Council, these kinds of disputes are to be settled in duels to the death. You are Barrett Jade, the Federation's most fearsome warrior, and you've been chosen to represent the planet against the alien forces. In the A-7 Trinity Rote Cyborg, you're equipped with machine guns, missiles, and lob grenades. If you're able to win a match, you can head to the weapons shop and upgrade your arsenal. Each match is a one-on-one affair, so strategy and intelligence are important elements of fighting a successful battle. The entire Federation is depending on you to defeat the aliens and re-open the flight paths, don't let your people down!

# 2015-05-03 15:24:40 - official description
The searing hiss of metal breaks the silence of dawn. As I step through the fleshy remains of my previous opponent, I realize the metal behemoth I am about to face is more fiercely equipped with deadly roto-bore proton rockets.

I know I represent our final hope as I mount the Federation's newest war machine... the A-7 Trinity Rote Cyborg.

This signal is given... I must proceed to the dueling ground. Today, death is in the air, and mercy in my guns, so LET'EM BEG FOR MERCY. 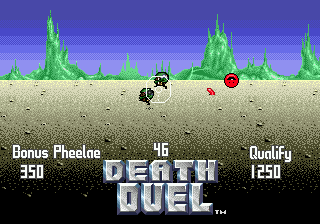