THE LEGENDARY FIGHTERS HAVE RETURNED...

You've thrilled to the action of "FATAL FURY 2" in the arcade - now play it on your GENESIS! Battle your way through the "King of the Fighters" Tournament as 8 different characters: including Terry, Andy, and Joe. The Tournament takes place in various locations around the world, and the fighting's so hot that sometimes it doesn't let up until dark... Why is the Tournament being held again this year? Which brother will come out on top, Terry or Andy? Are you good enough to master the "Super Attacks" and become the strongest fighter in the world?

* A big 24 meg capacity for realistic character movement and sizzling, non-stop action.
* 3D fighting action along front and rear battles lines.
* Control 8 fighters to fight your way through the "King of the Fighters" Tournament in 1P GAME MODE. Choose on of 12 different characters and take on a friend in Versus Mode. Battle it out in Survival Match; each player can choose up to 5 different characters to fight the other player's characters in turn to decide the winner.
* Each character has various "Special Attacks", as well as "Super Attacks" which can cause mega damage to your opponent. 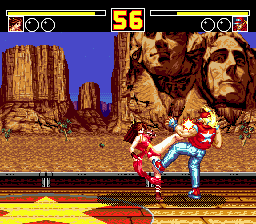