A tribute to the original coin-op classics that made the Turtles into video game legends. The game pits the four Ninja Turtle brothers against their old nemesis, Shredder, and his many villainous henchmen. Teenage Mutant Ninja Turtles: Arcade Attack features an all-new combination system, enabling players to string together uppercuts and roundhouse kicks to unlock a series of moves powerful enough to take out even the strongest enemy. In addition, the game will include a cooperative mode, allowing for arcade action with either a friend via local wireless, or a system-controlled Turtle brother. 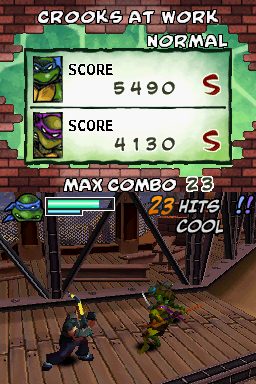