It was only a matter of time until a Othello/Reversi game would appear for Nintendo's 8-bit console. And this version has not more than the basics that you could expect it to have. You can choose between 2-player mode or player vs. computer. When playing against the computer you can choose one of four difficulty levels. On higher difficulty levels the program is rather strong. I let it play against a simple online Reversi game and the Famicom Disk System Othello won easily. The game has not much to offer nowadays and even in 1986 I think that it was bad value for money. 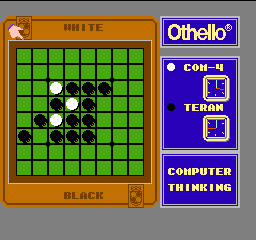