The space battle of the century has just begun. Enter a world of vivid color, imagination, and space fantasy. A mission to deceive the enemy guard in this bold new frontier. Pilot the awesome space fighters through the treacherous corridors of space. The newly developed fighter is equipped with multiple armament configurations that can be powered up 4 times. Three way and lasers are included in this arsenal and is enough to blow the enemies into moon dust. This horizontal scrolling space shoot them up is made for 2 player simultaneous play. Spectacular graphics and digital stereo sound add to the attraction. The adventure of a lifetime. The name of the game is..... ANDRO DUNOS. 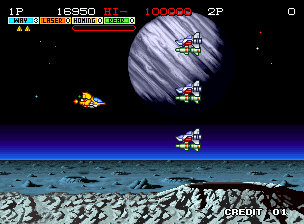