Directly from the game box:

This is your chance to command a fleet of destroyers, cruisers and battleships against aggressive enemy forces in the South Pacific.
Fire torpedoes into enemy vessels, issue commands to convoys of ships and confront enemy destroyers head-on in ferocious night battles.

Task Force 1942 from MicroProse. It's the only way to experience the thrills... and risks... of surface naval combat in World War II. 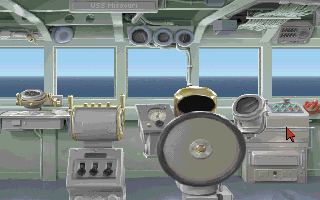