Quantox is a fast shooting game. You are in control of the Quantox ship and must survive 32 waves of attack to win the day. There are three sub games which appear after certain levels. Success at these sub games earns the credits which can be exchanged for better weapons. During the game certain ICONS appear. Care must be taken to collect only those which benefit Quantox performance. The icons benefitting the enemy must be avoided.
The enemy enters the battle arena by one of the six entrances and attacks in a squadron of four, a number of squadrons being active at any one time. The squadron splits up to attack the Quantox ship from all directions and the squadron quickens its pace as time passes. The shot enemy warrior is neutralised and killed by ramming. However, it regains its status if not rammed and becomes more powerful requiring more shots to be neutralised again. 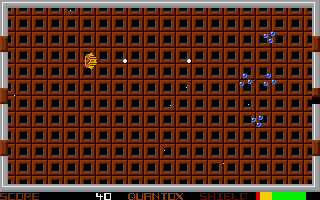