THIS GAME ROCKS. It is bigger then every Zelda game put together. It has BEAUTIFUL GRAPHICS AND MUSIC. This game even has CG MOVIES, and its for the SNES. Oh yeah this game is [available] in ENGLISH. Its never release in the US.

The Japanese title literally means, "The Creation of Heaven and Earth". This game was released in Japan, Europe, and Australia. No North American version was published.

sequel of
Illusion of Gaia (SNES) 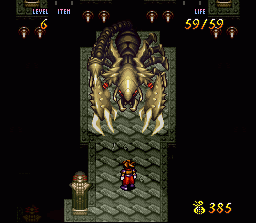