Aigiina no Yogen is a strange platform game. Between the different levels/dungeons you walk around on an overworld. Once in a dungeon the perspective changes to side-view and you have to kill a certain amount of enemies until a ladder appears to the next room and so on. Monsters are killed by activating stationary weapons which appear when you jump against blocks with your head. The game is really frustrating. The controls are a big issue. You can make normal and high jumps. But high jumps fail so often because of the unresponsive controls it ruins everything. And if the game wouldn't be hard enough because of that, the developers had you find five star fragments throughout the dungeons, which are in very secretly hidden rooms. And why they made the overworld so frustrating as well I don't know. Here you also have to walk on exact spots to trigger events like earthquakes which open up the way again. 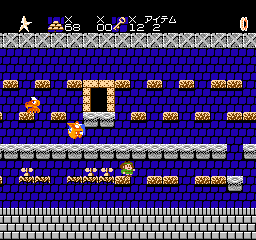