living weapons - the Soul Edge, though its nature in this capacity is a border case and mostly seen as such with Nightmare.

Sanguine # 2008-11-29 15:31:22
Raphael makes it to Nightmare in Ostrheinsburg Chapel, but he gets his ass handed to him. As Nightmare is standing over him, ready to finish him off, Siegfried decides that he's had enough. A nasty fight is taking place in Nightmare's mind. This buy's Raphael enough time to gather enough strength to attack and damage Soul Edge. This is enough for Siegfried to regain his mind.
He casts off his evil armour. Soul Calibur appears. Siegfried, sensing the energy from this new sword, thrusts it into Soul Edge. This, however, isn't enough to destory it. Only weaken it, and the swords merge together. Siegfried takes them both, with the intention of neutralizing and destroying Soul Edge.
Raphael somehow manages to make it home, where he is nursed back to health by Amy.
Meanwhile, the spirit of Soul Edge is driven from the sword. Needing a host, it desperately clings to Nightmare's armour, which is now laying on the floor of Ostrheinsburg Chapel. However, it is impossible for the spirit to manipulate an unliving suit of armour, so it is basically helpless on the floor.
Eventually, Zasalamel appears. Without speaking a word, the spirit and Zasalamel have a conversation. Zasalamel agrees to help the spirit, and creates a new body for it inside of the armour. This is the new Nightmare.
Siegfried senses this familiar energy reawakening. He now has two tasks.
To destroy the cursed sword Soul Edge, and to destroy the Azure Knight, Nightmare. 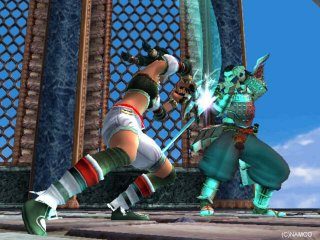