The dead are suddenly coming back to life and the race is on to stop them in this fast-paced action adventure! Young Goemon and Ebisumaru are called by the all-knowing ancient one to see his wondrous new creation, a machine that brings people back from the past into the present. But when the new creation is stolen and activated, it unleashes a world of ghosts and goblins! Now the final showdown is coming-Can Goemon find the courage to prevail? A whimsical sense of humor, and a cast of classic characters from Japanese folklore magically bring this rich polygon-based environment to life. Featuring two-player co-operative play, more experienced players can actually help out others by "piggy-backing" them through the course of more difficult jump stages, keeping the action moving-and magnifying the impact of their combined attacks! Battle evil in all its forms...fight and pilot huge robots...travel through mysterious worlds and more on the great adventure that's great on Nintendo 64! 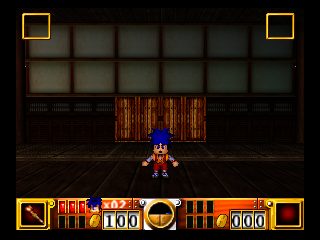