First game in the 'Langrisser' series and the only one which got also released outside of Japan under the title 'Warsong'. Although the series is known under the name 'Langrisser', the first games were officially titled/transcribed as 'Lungrisser', as can be seen in the end credits of the Japanese version.

has influenced
The Battle for Wesnoth (Linux) 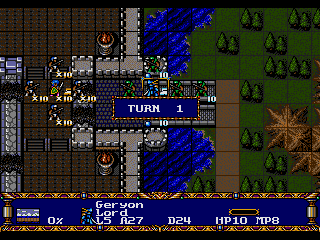