Lara is said to be dead in Egypt, because the Temple of Horus, collapsed with her inside. Some old friends (Bram Patrick Dunstan, Winston, and Jean-Yves) meet in her mansion to pay their respects and talk about some of her adventures we haven't seen so far. You have to play 4 small adventures in order to finish the game .

1st Adventure: Rome
Pierre du Pont and Larson teamed up. Lara wanted to buy the Mercury Stone from Larson, because this artifact was essential in order to find a more important one: The Philosopher's Stone. They met in an Opera House. However Pierre and Larson wanted both money and the Mercury Stone, so Lara grabbed the stone and with a clever trick, she escaped from them. Now, you have to find the chamber of the Philosopher's Stone and collect some artifacts which you need to place on the doors of the chamber, against Larson and Pierre.

2nd Adventure: Russia
A German U-boat found the Spear of Destiny, which was rumoured to be able to make the German army invincible. The U-boat sunk (why?) and the Spear of Destiny was lost in the sea. Today, a Mafioso, Sergei Mikhailov, wants to take the artifact and an admiral of the Russian navy, Yarofev, helps him with his ship, because he needs money badly. So Lara tries to get into their ship and find the artifact first.

3rd Adventure:Ireland
This is an adventure of Lara when she was young... She lived with Winston and his wife for a while in Connussie, when Father Dunstant came and said that he was going to go to a nearby island because there were strange things happening on it (strange lights, sounds e.t.c.). As a priest he had to check it. Lara secretly followed him and went to the island, hidden in his boat. You, now, have several tasks to complete, because many unholy creatures await for you and the boss of them, the Demon Knight, is very unpleasant.

4th Adventure: Von Croy's Industries Headquarters(VCI)
People who have played Last Revelation, know that Von Croy got trapped while trying to take the Iris artifact. He somehow survived ,took the Iris and put it in VCI Headquarters. Lara decided to steal it. She has to deal with tough armed men and robots, jump, climb and press lots of switches, before she can exit the building. Zip, a new friend,talks to her and gives her advice on her guest for the Iris (of course,he talks to her through some sort of headphones). 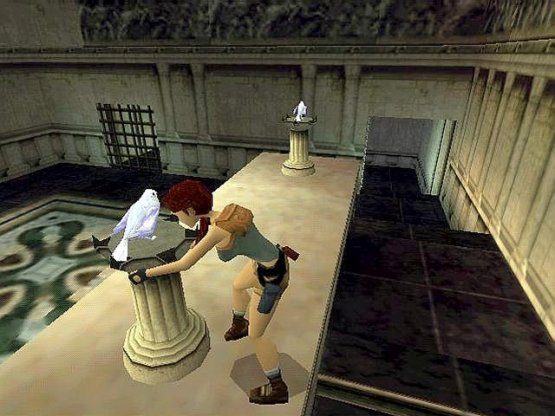