a.k.a. The Game of Dungeons

Written in the TUTOR programming language.

An unofficial implementation of the Dungeons & Dragon ruleset. dnd takes a player into the many levels if Whisenwood Dungeon where there are many monsters and treasures. The ultimate treasures are The Orb and the The Grail. A roll your stats, choose your class and launch your character into an epic adventure. Take rest from the action. trade plunder to equip yourself better. Save your game and load it later. All the time learning how to make better use of the PLATO keyboard.

dnd 8.0 was preceded by pedit5, m199h, and 7 major versions of dnd and is believed to be the third dungeon crawl/RPG made for the PLATO system. All of which were deleted from the PLATO system for being illicit games on computer system designed solely for education. Although, dnd 2.8 source code was printed out and served to recreate the game until Dirk Pellett was able to restore it from tape backups more recently. dnd 8.0 escaped the abyss and is now available for emulation. dnd version 5.4 also continues to exist and is available to play. The version restored from tape is actively maintained in modern TUTOR language by Dirk Pellett.

The PLATO keyboard used the W, A, X, and D keys for UP, LEFT, DOWN, and RIGHT arrows and it had HELP, DATA, NEXT, and BACK keys. The game was finally allowed to stay on the system because its creators convinced administrators that it taught PLATO users how to use the special keys on the PLATO's keyboard. This wasn't as silly as it may sound. While programmers used the keys in a standard way, this standard wasn't common knowledge to end users. There was no training applications on the computer to explain the system either. Each application had to explain it every time, or not at all. The choice was to waste time and space on the same information every time or be extremely unfriendly to new users. Assigning functions to the special keys in a game was an efficient and intuitive way of training end users in their use, especially the 'arrow' keys. In a way, it was the forerunner of typing games and other games designed in whole or part to train users how to use hardware.

PLATO computers where setup at 150 educational locations including high schools, grade schools and even a few made into private homes. dnd remained a popular game on the platform. It influenced the creation of other CRPGs, especially avatar, oubliette, baradur, moria, dndworld, bnd, and sorcery. dnd saw many improvements until the last functioning PLATO computer was switched off for good in 1995. The US military operated for a time after this but no games werer available on it.

Due to a unique quirk of history, dnd was the first CRPG to ever be viewed on a flat screen display, it also happened to be a plasma display, another first. And if that wasn't enough firsts, the PLATO could be connected to a standard TV. But wait, there's more, it also was the first to use bitmapped graphics, rather than displaying memory directly, which the Plato could also do, and it was capable of vector display. Thus they were not only before Nintendo with VRAM, but also before Alpex by using a TV to display games. And there's still more, a microfiche rear projection system was built into the display, color images could be used as back grounds. And did I mention the PLATO had a touch screen interface?
But, the most important innovations were unique to the dnd game and not the platform. dnd was the first game to have shops where players could buy items, weapons, armor, and potions. The player would encounter stronger monsters as they advanced in the game, and get better treasures. This attempt to replace the dungeon master with a computer algorithm was the beginnings of adaptive AIs for games. The concept of the teleporter was introduced to games by dnd. For the first time, different types of monsters where venerable to different types of attacks. Also introduced were bosses and mini-bosses, that is, extra high level enemies guarding important treasures, the entrances to levels and of course the orb itself
was guarded by a Dragon, who was in turn, guarded by minions.
The player was not trapped in the dungeon. Leaving the dungeon was a chance to recuperate, buy supplies and save the game. Another innovation was placing the gameplay within the context of a complete story. Instead of just having a setup, the story had a beginning, middle, climax, denouement and end. NPCs were added, developed and also removed as part of the story. Story content included humor and irony for the first time in a game.

There was also a PDP-11 version written for RSTS/E and a DECSystem-20 version for TOPS-20; both by Daniel Michael Lawrence. Both of these were ports (real ports) from the DECSystem-10 (PDP-10) version. 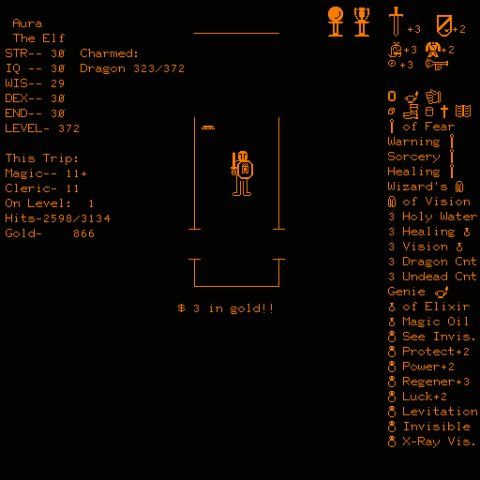