Based on the Blue Seed anime/manga which revolves around Princess Kushinada and the Aragami.

Main characters:
- Momiji Fujimiya (藤宮 紅葉), the current "princess" of the Kushinada family, she also has one mitama
- Mamoru Kusanagi (草薙 護), he has 7 mitama and although originally human he resembles one only superficially and even less during fights

The Blue Seeds are called mitama within the anime and manga. 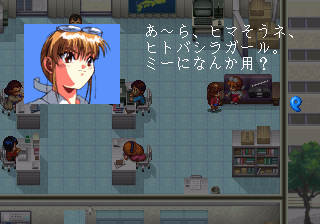