Dungeon Lords: The Orb and the Oracle

Endowed with a new mystical vision, the Elven wizard Emmindor, is forewarned of a re-emergent evil. The Incaba Dominastra, an ancient secret society thought destroyed at the end of the last age reappear to embark upon a quest of unholy purpose.

Relaying his vision to the high wizard Galdryn, Patriarch of the Circle of Mages, Emmindor has learned only that the Incaba Dominastra still survives and has dispatched a clandestine agent to seek and recover an ancient artifact known as the Orb of Oracles. Galdryn confides to Emmindor that his knowledge of this artifact is limited to but a single rumor - that anyone who possesses the Orb of Oracles is not only able to see the future, but to journey there as well...

Galdryn summons our hero, and sets before us a most dangerous and covert mission, to uncover the identity of the mysterious dark agent of the Incaba Dominastra, and to obtain the Orb of Oracles before the Incaba Dominastra can retrieve it. Galdryn relates that according to the ancient tales, the Orb of Oracles was hidden far in the Northlands, beyond the kingdom of Rothn, and is protected by a special guardian. The tales say that there is an ancient mystic who lies in wait, known as the Oracle of the Orb, and that this Oracle alone possesses the knowledge of where and how the magical Orb might be won from its guardian. To find the Orb, one must seek out the Oracle.

* A massive fantasy world filled with non-stop action and meticulously detailed indoor and outdoor environments. Explore shrines, campsites and country cottages throughout the vast rolling countryside, mountains, woodlands, swamplands and more.
* An advanced and robust combat system couples with devastating magic spells for a variety of ways to vanquish your foes in real-time.
* 25+ different classes to choose from and 3 class tiers. Create your character using a combination of 5 classes from the different tiers, opening different skills for each.
* An epic, non-linear single-player campaign coupled with a multiplayer co-op campaign.
* Hundreds of weapons, spells, items and rare artifacts to equip and use.
* A variety of personal quests and missions, featuring a world filled with NPC characters to interact and bargain with.
* Build your character earning experience, gold and other valuable items as you complete challenging quests. Unlock advanced class types for new depths of gameplay.
* Designed, written and developed by award-winning computer game author D.W. Bradley.

2008-06-25 Announced by JoWooD and DreamCatcher Games
2009-08-07 DreamCatcher announced the project was put on hold
2011-08 Nordic Games (the new owner of JoWooD/DreamCatcher) announced they'd continue current and future projects. The Orb and the Oracle seems to have not been included in this resolution. 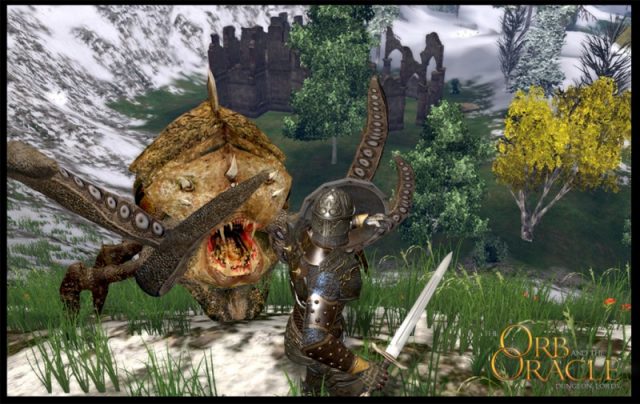 Dungeon Lords: The Orb and the Oracle in-game screen.