This game was only released in Japan. This game is not a actual sequel, but rather a redesigned version, using the newest Darkstalkers engine. It even includes a reworked version of "Vampire Savior 2"'s intro, which removes all references to Jedah, Bulleta, Q-Bee and Lilith. 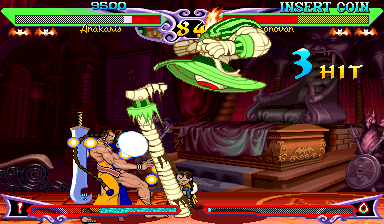