Battletech: A Game of Armored Combat

The 31st century is a brutal and violent place. The galaxy is racked by a devastating war waged with gigantic 75-ton BattleMechs teeming with the most ruinous weapons that science can create. MechWarriors like you needed to pilot the "Madcat" Heavy OmniMech on desperate missions against enemy installations. This is the world of BATTLETECH®!

Alone against the relentless onslaught of hordes of enemy defenders, you'll need skill and cunning to knockout your objectives! Steer your lumbering 'Mech into the savage fury of a hornet's nest of attackers, and cut loose with the Madcat's incredible firepower to lay waste to all before you! Fight to the last for a victory that will bring you honor and glory! And if honor isn't motivation enough, it helps to remember that the enemy doesn't take prisoners...

* Use 9 futuristic and devastating weapons systems to obliterate enemy resistance!
* Battle the ground defenses of the Inner Sphere on five different planets!
* 2-Player Cooperative Mode lets one player steer while the other controls Madcat's weapon systems!

Excellent mecha-oriented shoot-'em-up based on the now famous RPG.

similar to
Desert Strike: Return to the Gulf (Mega Drive) 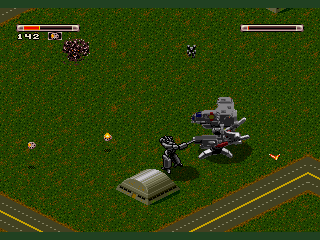