Use your special Martial Arts skills, Punch, Kick, Jump, Flying-kick and Super-punch; with added power in the shape of special Ninja-style weapons.
The opponents in your battle for supremacy are four types of Evil star-throwing Ninja Assassins whose skills are manifold and dangerous. Also out to spoil your day are acrobatic Women Warriors and vicious Guard Dogs.
At the end of each level you must overcome the Ninja Master in order to progress - some examples of these superhuman villains are: A fire-breathing Fat Man, an Armour Clad giant and the Green and Gruesome Giant Ninja - who has a disconcerting habit of suddenly multiplying into an army!
Mission accomplished?...not yet! Now rescue the President of The United States from the grip of these villainous warriors and fly him to safety. Dragon Ninja, the hottest coin-op conversion around, designed to give your computer some real kicks!! 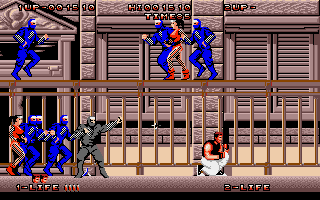