Nearly two years after the cartridge NES version of Karate Champ was released in the US, the game made it to Japan for the Famicom Disk System. First it is strange that this was so long a US only release and even more strange that they eventually decided to bring this bad fighting game to Japan. The controls and especially the hit detection are rather bad. It felt to me that it is pure luck whether you hit your opponent or not. The game plays different (in a negative sense) than the arcade version. The background graphics have a mixed quality, the animations are unspectacular. On the positive side I could mention the little speech samples when a fight begins. Otherwise I see no real good points in this overall disappointing game. And two years later this impression must have been even more prevalent. 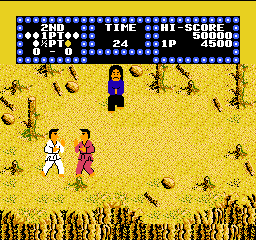