Early PC-Engine CD-ROM game. Gameplay is nothing special. Jump and fight your way through six levels of monster-infested areas. At the end of each act you have to fight a boss enemy. Fighting you do with your magical sword, which actually strangely behaves like a gun, so don't expect slashing through your enemies. It's some kind of platform/shooter game, which originated on Japanese home computer systems like the MSX. What makes this game special are the numerous, rather long, anime-cutscenes. Not much animation in the cutscenes, but they are nicely done and include voice-acting. Quite impressive for its time. Another strong point for me is the catchy music in CD quality. Graphics on the other hand are just average. Some areas lack detail, while others look very good (e.g. the boss rooms).

From the ashes of your ravaged homeland, the legendary sword Valis calls out to you. Its power transforms you into a ferocious warrior against the evil forces of King Magus. Crush Zarooga, the fearsome red dragon! Battle the unspeakabe Death Pod! But beware! Magus has sworn a blood oath to destroy you and capture Valis, to possess its power forevermore. Summon all your fury to face Magus in an epic struggle over the fate of your countrymen. 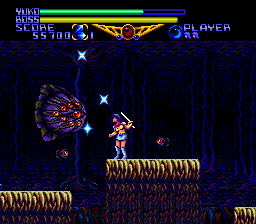