The Gunstar 9 planet was peaceful for many years until the vicious dictator, Colonel Red, kidnapped the Gunstar twins’ older brother and used mind control to make him his slave. Players face many different enemies and bosses while battling to stop the dictator from unleashing "Golden Silver the Destructor" with apocalyptic consequences.

Also included in Classic Collection (aka Mega Games 4-in-1), released in Europe in 1996 and published by Sega, rated ELSPA-3, that included Flicky, Gunstar Heroes, Altered Beast and Alex Kidd in the Enchanted Castle.

dandyboh # 2013-02-11 08:03:35
Quite possibly the best game on the Genesis/Megadrive...an awesome Contra-style run'n'shoot with insane weapons, massive hordes of enemies, gigantic bosses, and explosions everywhere. The best music and some of the best graphics in any Genesis/Megadrive game.

# 2004-07-19 11:09:45
Gunstar Heroes is one of the greatest games ever. It has so many combinations of weapons that owns every enemy.
The Best combo ever is laser triangle because it locks on to the enemey on drains his health like crazy. Enjoy the game because it is an awsome game 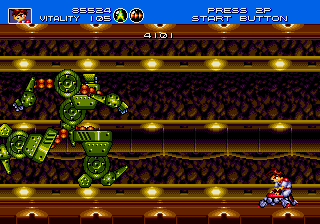