Hudson Soft licensed the first two Ys games from Falcom and put them on one single CD-ROM for their PC-Engine system. And they did a very good job. Opulent intro and end sequences, speech for important characters and beautiful CD-audio music. Together with Tengai Makyou: Ziria the breakthrough for anime-style PC-Engine CD-ROM games. Add a decent story and nice gameplay and you have a great game. Ys complexity doesn't lie in its controls, which are very simple. You only have to run into enemies to kill them (or they kill you depending on your equipment and stats). The difficulty results in the sometimes very confusing layout of the numerous dungeons (shrines, towers, mines etc.). Without a good map you will get hopelessly lost. Ys 1 and Ys 2 play very similar. The only difference is that you have some magical abilities available in Ys 2. Since both games represent one big storyline, you have to play through Ys 1 to automatically continue with Ys 2.

Ys Book I & II chronicles the first adventures of Adol Christin, a young, red-haired swordsman on a quest to unlock the secrets of an ancient kingdom. As Adol, you search the island of Esteria, gathering clues to unravel the mystery of Ys. Fight monsters that lurk in caves and towers with physical or magical attacks, and use your brain to make your way through dangerous areas filled with traps. In Ys Book I & II, the first titles in the Ys series were put together as a single TurboGrafx CD-ROM. They awed players with their gripping story lines accompanied by fully orchestrated soundtracks, wonderful voice acting and amazing special effects. Don't miss out on your chance to experience this wonderful piece of gaming history.

was remade as
Ys Eternal I & II (Windows) 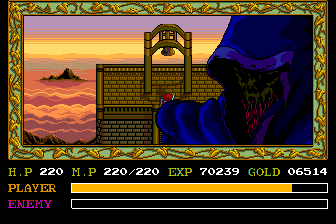