The original Sonic The Hedgehog that busted the speed barrier wide open on the SEGA Genesis is coming to the Game Boy Advance. For the first time, you'll be able to save your high scores and progress as you rocket through the seven gravity-defying stages that started it all. After you outrun Dr. Robotnik and his badniks in Original Mode, race through the famous loop-de-loops even faster with Sonic's trademark Spin Dash in Anniversary Mode which celebrates Sonic's 15th birthday. This special 15th Anniversary Edition also brings tunes from the original soundtrack which you can unlock as you finish the stages. All seven of the classic stages have been perfectly ported over so you can experience the classic on GBA. New Save feature. Don't let Robotnik get away! Save your progress and come back to finish the job later. Anniversary Mode. In celebration of Sonic's 15th anniversary you can now Spin Dash out of danger. New Spin Dash ability. This is the first time Sonic's supersonic spinning maneuver is available in Sonic the Hedgehog. Unlock the classic soundtrack. As you progress through the stages, unlock the sweet sounds of the original in-game soundtrack. 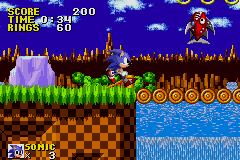