I'll admit, I was wowed by the graphics, sound and speed of this game when I first seen it. The fast paced music matches Sonic's speediness well (and is an amazing accomplishment since the music itself is only 8-bit and not 16-bit). The sound effects don't sound nearly as artificially generated as the one's on 8-bit systems. So far so good. But then story falls short, presented as one small paragraph in the game manual. The levels have lots of rings to collect and having at least one acts as a hit point so enemies, flames and spikes don't instantly kill Sonic. Sonic needs to be holding a minimum number of rings to access the special stages at the end of each level so he can grab the Chaos Emeralds. No where in the manual does it say what this minimum number is, nor what use the Chaos Emeralds have. Though it does say Sonic must prevent Dr. Robotnic from obtaining them. In fact the manual seems to have been written by someone unfamiliar with the game. It says to look for "secret rooms" when there is nothing that really resembles "rooms" in the game. There are areas difficult to see or access and
breakable walls that look like normal walls. The manual does not explain or even hint at breakable walls.
The manual says the special zones are traps! (Traps where Sonic cannot lose a life. Traps without time penalties. Traps full of all sorts of great bonuses)! There is no AI to the enemies, they all follow a set pattern and most of them are very simple. The Atari 2600 has better controls, seriously. When I press down on the Atari joystick, my character always take the proper action. But in Sonic, pressing down often causes Sonic to move left or right instead of crouching while standing still, or rolling into a ball when speeding. Actually, I prefer to use an Atari joystick to play Sonic, its compatible with the Genesis game port, and it helps. Sonic only needs one button during play anyhow. The control scheme doesn't not have a 0 learning curve becuse it takes a moment to learn that all three buttons preform the exact same jump. When in a level (an "Act"), Sonic has access to the whole level being able to go forward or backward with only certain spots being difficult to access once passed. This is a bit unusual for platform games at the time. Sonic's main competition, Super Mario Bros, didn't allow this. Like SMB, Sonic cannot go to a previous level. Unlike SMB, there are no shortcuts to higher levels. Sonic is very linear but allows some freedom to explore every nook and cranny of each individual level. There are multiple checkpoints in each level. Without activating a checkpoint, Sonic will restart the level when killed. Otherwise he will start at the last checkpoint he touched. Sonic has lives, and can earn extra lives. There is no way to save progress if the Genesis is switched off. Sonic has an absolute minimum playtime of just under 18 minutes, and a maximum of about 3 hours. This maximum is because there is a time limit on each level. The challenge comes not from completing the game, which is fairly easy, but from winning against Dr Robotnic. Winning the game is somewhat satisfying. The way to win the game is strongly suggested by the ending you get when you don't win and its a spoiler for me to say how.
The story demands that Sonic stop Dr Robotnic before he collects the Chaos Emeralds. Yet it is possible to 'beat' the game without collecting them. In this case, the player actually loses (according to the story), because Dr. Robotnic is seen juggling the Chaos Emeralds and will proceed with his evil plans. Collecting 6 chaos emeralds before beating the game is required to "win".
This element of beating the game with or without winning kinda rescues the story a bit, but doesn't save it. Along the way, Sonic does not gain any permanent abilities nor is the story advanced during the game. Sonic 1 is simple, this has a certain appeal I suppose. But it doesn't lend well to social interaction revolving around the game. There are some hidden things that can be shared with other players. There are subtle details in the character's animations and extras in the graphics like shadows. But very little gameplay details. Piratically all the innovation in this game has to do with the sound and graphics, which were great improvements for games but not quite full innovations. They take good advantage of the Genesis hardware, which is the actual innovation. Sonic can be a bit destructive to his environment and the robots sent to attack him. On the other hand, he's destroying robots instead of actually killing as most platformer protagonists do. And he's simultaneously rescuing animals that are imprisoned in the robots. Their's no bad language, addictive substances, or sexual themes at all in the game. Later games, but not this one, added slot machine elements.

Bottom line:
Its not very good. Its all about the speed, graphics and sound. Sonic 1's SG&S were amazing at first, and it was a pioneer game for SG&S. But SG&S competition among game manufacturers would eventually devastate game quality as they were given top priority and all other aspects of the game, especially gameplay, became lesser priorities or even ignored. Playing Sonic 1 now just makes me sad. I do note however, that the later games in this series did improve tremendously.

p.s. if you're an RPG fan, chances are you won't like this game... all you can do is run, jump and spin.

Rocket Sonic, the fastest blue hedgehog on earth, through hair-raising loop-de-loops and dizzying dives past bubbling lava, waterfalls and on as you gather up Rings and stop Dr. Eggman's (AKA Dr. Robotnik) schemes for world domination!

Bust the video game speed barrier wide open with Sonic The Hedgehog. Blaze by in a blur using the Super Sonic Spin Attack. Loop the loop by defying gravity. You can even spin around in a 360° rotating maze. You've never seen anything like it!
On the title screen, quickly press ↑ ↓ ← → A+Start

Also included in Sonic Compilation (Sonic Classics in the USA and Brazil, 소닉클래식 in Korea, Sonic 3-in-1 in the New Zealand), released in 1996 and 1997, published by Sega, rated ESRB K-A, that included Sonic the Hedgehog, Sonic the Hedgehog 2 and Dr. Robotnik's Mean Bean Machine.

has this clone
Jurassic Boy 2 (GBC)

version of
Sonic The Hedgehog (iOS)

was remade as
Sonic the Hedgehog Genesis (GBA) 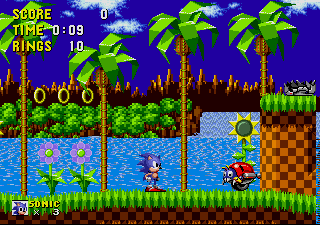