Dr. Eggman (aka Dr. Robotnik) is back to continue his zealous search for the Chaos Emeralds needed to fuel his new Death Egg contraption. The evil doctor secretly follows Sonic to his vacation spot, Westside Island, and launches a full-scale attack, imprisoning all the helpless animals of the island and turning them into mindless worker drones. Now Sonic must thwart the doctor's plans at all costs. This time he isn't alone, as a peculiar two-tailed fox named Miles Prower (aka Tails) decides to aid him in the battle. Together they must locate the Chaos Emeralds before Dr. Eggman does, and put an end to his diabolical scheme.

Sonic's back and better than ever. He's a blur in blue! A blaze of action! With his new Super Spin Dash. And a new, fabulous friend, 'Tails' the Fox. You won't believe it 'til you see it. And when you play, you won't stop.

Also included in Sonic Compilation (Sonic Classics in the USA and Brazil, 소닉클래식 in Korea, Sonic 3-in-1 in the New Zealand), released in 1996 and 1997, published by Sega, rated ESRB K-A, that included Sonic the Hedgehog, Sonic the Hedgehog 2 and Dr. Robotnik's Mean Bean Machine. 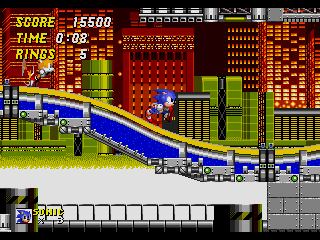