There are 3 Munchers, each distinctly colored. Each maze has 12 munchies to eat. The munchies start in 4 groups but slowly proceed to roam the maze. As each is eaten, the remaining munchies go faster until the last munchie moves at the same speed as the Munchkin. Eating blinking/flashing munchies cause the Munchers to become venerable for a short time. The Munchers' home square rotates, so that the 'door' cycles through all for directions. This can slow down a Muncher's attempt to regenerate. The player can enter the Munchers' home square too; both can exit in a direction other then the direction they entered. In some mazes, the Munchers' home square is a gateway to otherwise inaccessible areas of the maze. There are 4 pre-built mazes in the normal mode. Additionally, the normal mode includes invisible variations of the mazes that blink off as soon at gameplay begins. In random mode, each maze is randomly generated. Players can create their own mazes in the game. Alas, there was no way of saving these designs using the game. However, they can be preserved with save-states used in emulators.

The Munchkin cannot get it by chasing it, it is too fast. You must calculate where it it going and intercept it there. Alternatively, grab the last 2 munchies simultaneously or in rapid succession while the very last one eaten is headed toward the Munchkin.
A Muncher will not leave the home square as long as the Munchkin is powered up. So steer the munchkin into the home square and repeatedly chomp the Munchers until the power-up fades.

This game was specifically designed to be as legally close to Pac-Man as could be gotten away with, defendable in court, and better than Pac-Man. While the maze is smaller, there are significantly less pills to chop, and only three ghosts instead of 4, the maze is animated and more of the screen is accessible, the pills move, and the ghosts are actually different animated characters rather than static clones. And NO FLICKER! Atari (and Sears) were fond of listing the number of game variations on their packages, cartridges, and catalogs (number of players, various features on or off, vehicle types, difficulty levels). In response, Phillips/Magnavox proudly displayed "Unlimited Variations". They could claim this because of the randomly generated and player designed maze modes.

Magnavox was sued by Atari who had obtained the rights for the home version of Pac-Man. Atari initially won. One of the details repeatedly brought up in court was the Munchkin's chomping action being too much like Pac-Man's. However, the decision was reversed in the appellate court; although no further copies of the game were produced. The entire fiasco set a precedent for copyright in gaming, and Atari would follow it with a number of lawsuits against various other companies. But the overall effect was the legitimizing of clones. Magnavox would follow-up with a Munchkin sequel that was less Pac-Man like but starred antagonists that were other characters belonging to Atari.

A prototype version of this game exist without the Munchkin and Munchers. Instead it has Pac-Man and Ghosts!
There are also hacks of this game. The PacMan hack makes the characters and mazes much more like Pac-Man, but since the Odyssey² cannot produce yellow, it was never finished. The Beast Munchkin hack inserts the Transformers: Beast Wars characters.

'K.C.' were the initials of the president of Magnavox in 1981 (K.C. Mencken). Because of this, some fans like to call the Munchkin, "Mencken Munchkin", but this is not official

TagsThis game is part of a series and includes a level editor. Ironically, its innovative because its the first clone to be legalized in court. This was a victory for gamers who would otherwise never see certain games for the system they had purchased unless it was in clone form.

Relations
Obviously, and it has been stated by Ed Everett, this game is Pac-Man for the Odyssey². However, it is different enough to be a unique game despite the Pac-Man influence. So its not quite a true clone. Also, the Arcade version of Pac-Man was the main influence. Atari's version of Pac-Man was actually published a year after this game. This by no means excludes it's influence. Atari's acquiring of the Pac-Man license promted Munchkin's development, all the while the developer knew that his efforts would have to be better that the 2600 game Atari was eventually going to produce. It is a good thing Munchkin was done before Pac-Man 2600, because this would have significantly lowered the bar for Munchkin. 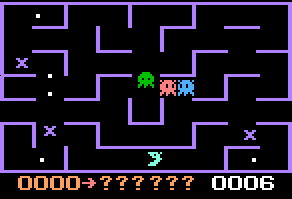