a.k.a. Sonic and Knuckles

Sonic and Knuckles is the first (and possibly only) game for the SEGA Genesis featuring the Lock on Technology. This means that, in addition to eight levels, you can attach it to the Sonic 3 and the Sonic 2 cartridge, increasing the amount of gameplay significantly.

Play as Sonic or Tails, to defeat the evil Robotnik. Or play as Knuckles to save the floating island from a group of renegade robots out to capture the magical Chaos Emeralds.

You can also attach it to Sonic 1 or Sonic Spinball and then press A+B+C simultaneously: then you have a new game, which contents thousands levels similar to some Sonic & Knuckles level bonus... If you attach it to any Megadrive / Genesis game, you have a single level of this new game.

If you attach it to Sonic 3, then you have 14 emeralds to gather instead of 7 : when you have seven of them, you can be Super Sonic, and when you have all fourteen, you can be Hyper Sonic (or Super Tails / Super Knuckles if you play with one of them): more powerfull, higher jump, special attack and even faster... whoaaaaa !

Sega programmers said that the palette of Sonic 1 made inserting Knuckles a very difficult task. The Idea was scrapped. But someone eventually hacked it and a patch is available on the net to insert Knuckles into Sonic 1 using the joined Sonic & Knuckles and Sonic the Hedgehog ROMs. Its titled, Knuckles in Sonic the Hedgehog. The Knuckles character is fully featured having all the same moves, abilities, speed, and jump. 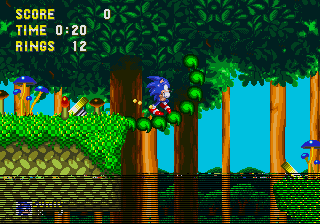