Welcome to Iccus, planet of the flying men. You are Wor, a winged battle master with the power to hurl bolts of energy and control the magical forces of nature.

Your planet has been taken over by an evil virus that has mutated into a collection of the grossest creatures ever to slime a tunnel. They are the Mutants of Iccus, led by the terrible Destroyer. Many have taken on the mutants before you...and failed. Now it's your turn. From the deepest caverns ot Iccus to the belly of the beast itself, you must fly and fight for the life of your planet! It won't be easy...but then the best battles never are! Destroy the Destroyer and Iccus will be saved, and its skies free once again. But fail and your wings will be cipped forever!

OBJECT:
The object of Gynoug is to defeat the mutants that have taken over Iccus. In addition to a couple of hundred minor creatures...each of which can destroy you with a touch...there is a mid-round and end-of-round large mutant you must beat to win the game. There are six rounds in all. If you win, Iccus is saved. Fail, and the planet is doomed to an eternity of rule by some pretty disgusting monsters! 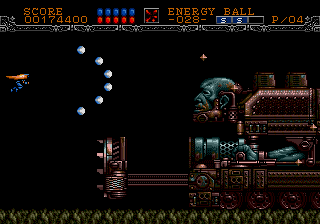