There are a couple of things you could complain about in Phantasy Star 2. The dungeon mazes are very confusing and difficult. You have to fight many random monster encounters to raise your levels. But somehow the games' atmosphere, the story and the combat system make you want to play this game, despite its difficulty.

teran01 # 2013-03-20 12:01:49
1000 years after the events of the first Phantasy Star, the Algo system is now ruled by the gigantic computer called 'Mother Brain'. However, there is evidence that Mother Brain - presumably no relation to Samus Aran's arch-nemesis - is malfunctioning, causing horrible creatures, called Biomonsters, to roam the land. The Motavian Police send their best agent, Rolf, to investigate. And thus begins the world's first 16-bit console RPG, which raised the bar for the entire genre in terms of story depth, characterizations, and (of course) graphics and sound. It is also one of the most challenging RPGs ever made; you'll be playing this one for a very long time.

The people on a technically advanced planet Mota make experiments to create biomechanical creatures. But one day, a creature was created that appeared to be dangerous to the humans themselves. And no signal came to the capital city from the experimental labs... You, a nameless young man living in Paleo, Mota's capital, is commanded to go to the labs and check the issue. Your friend Nei, a semi-human girl, goes with you, and other brave adventurers join you on what starts with a simple mission but develops into saving the entire world...

# 2017-06-17 17:17:25 - official description
Hailed as one of the greatest games of all time by fans and media alike, Phantasy Star II is an RPG that features an epic story line and turn-based battles. Play as Rolf, Nei, Rudo or several other characters as you navigate through the Algol star system battling the evil Dark Force. Build your characters, select the right weapons and armor, and take on the forces of evil through various missions as you find the right combination of characters to complete each objective. Experience the magic once again in this great sequel. 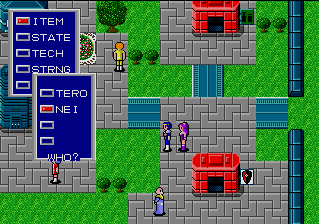