Sanguine # 2008-10-03 07:57:23
EV Nova is a top-down spaceflight RPG. The stock scenario features an unprecedented 288 ships (though only about a hundred of them are actually available to the player). Players have access to six major storylines, each with its own goals, results, and equipment.

EV Nova adds a number of features that make it at once more complex and more user-friendly. Chief among these are the ability to select nearby targets simply by clicking on them (whereas in Escape Velocity Classic and Escape Velocity Override, the player had to scroll through all the ships in the system); the ability to exercise as fine a degree of control over your hired/captured escorts as you could before over your bay-launched fighters (i.e. send them after specific targets, for instance); and a tutorial that lets players unfamiliar with the series to learn the ropes under the tutelage of a retired star pilot by the name of Barry.

EV Nova is also expandable by means of plug-ins, some of which merely add ships or weapons or what have you to the stock scenario. Others, called TCs (Total Conversions), replace the entire universe with an all new one. Only three TCs are complete at the moment: EV Polycon, and the ports of the first two Escape Velocity games.

EV Nova was, like its predecessors, originally released for Mac OS. A Windows PC version was released in June 2003.

EV Nova is the third game in the Escape Velocity series, and is by far the most ambitious installment to date. With a completely redesigned gaming engine, EV Nova thrusts you into a sprawling universe dominated by a myriad of warring factions, each sharing a common bond, but so philosophically different as to make conflict inevitable.

The remnants of the Colonial Council's utopian vision of a united galaxy are littered about like so many discarded dreams. The eccentric genius in Omata Kane, whose Hypergate system brought distant stars within reach, has all but been forgotten. Like a wave in the darkness of space, colonization flowed outwards from Earth, until discord and dissent against a growingly corrupt central government caused it to come crashing down.

Open rebellion caused the destruction of critical parts of the Hypergate system, severing entire systems from the umbilical cord of civilization. They were left adrift in the lonely void of space, forced to fend for themselves, truly strangers in strange lands. The collapse of a central government caused civilization to slide helplessly into a dark age of isolation. The few pockets of humanity that did survive developed in near solitude, clinging perilously to life like a tree desperately trying to gain root on a rocky cliff.

Time marched on in its relentless journey toward the future, and each of these civilizations slowly reconstructed their humanity... but in their isolation, a strange thing happened. They each followed markedly different paths in their evolution. As rediscovered technology finally allowed contact between these far-flung children of the Colonial Council to tentatively resume, they found that they had little in common. Indeed, rather than reunited brothers, they were strangers... or worse, adversaries.

It is into this maelstrom of territorial contention that you are thrust, like a pebble tumbling aimlessly between the tectonic fault lines that uncomfortably separate these divisions of humanity. Welcome to EV Nova. Will the pebble become an avalanche?

EV Nova is available from Ambrosia Software's web site. For more information about the storyline, check out the Preambles (click the "Online Resources" link). 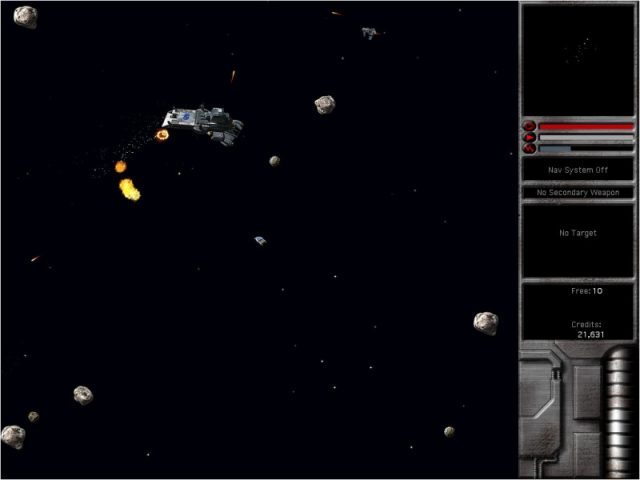 The player (flying a shuttle, center) looks on as a Federation battle group exchanges fire with an off-screen foe.