Simulates travel within our solar system to scale in 2D (everything is on a flat galactic plane). Orbits of the planets and moons are limited to being circular and are not calculated themselves. But the mass and scale of every item and the distances are simulated. Scale is synchronized to time, so if you zoom out, time runs faster. This helps pass the time for interplanetary distances. In fact you can zoom out enough to reach Pluto in a few seconds. Nothing past the edge of our solar system is simulated; so don't venture out of site. The player's ship trajectory and speed is fully calculated using the gravity of the center of the closest strongest attractor. This makes landing on some moons very interesting. Phobos' mass is so tiny compared to Mars', you actually have to go beneath the surface of Phobos in order to make it's center the closest strongest attractor. While surface contact is calculated collision damage is not. Acceleration is fixed, but like everything else, is scaled to the display. So acceleration always remains the same when measured in pixels per second per sec second. Rather than rotate the ship, the universe was rotated around it, as far as the display. Coordinates can be displayed and are based on the center the closest strongest attractor. If there is any object to this game, it would be traveling to, and landing on, every planet.

Trivia:
This was the game that UNIX was created to run. Literally, Ken Thompson invented UNIX to run this game. Thus it is the first UNIX application and the first UNIX game.

There was a charge for using the Multics time-sharing system on the GE-645 that AT&T owned. AT&T employees were apparently allowed to use 'company money' to cover this cost. Good thing too, because in 1969 this game cost $50–$75 dollars (not cents) per play (about $275–$412 in today's economy). See it in your currency at XE.com. 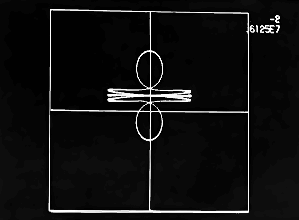