Take on a legion of Space Pirates and a new Metroid force as you forge into the underworld of Planet Zebes! It's up to you and Samus to recapture the long-surviving Metroid hatchling before evil hands unleash its energy. An army of ominous creatures are poised for battle at every turn of Zebes' twisted threatening passageways...including the menacing Ridley and the great lizard Kraid. Knock down enemies with a killer somersault and swing on an electric beam through narrow passageways! They're no match for you and Samus...but wait! It seems the Mother Brain has returned...

The baddest bounty hunter this side of Bobba Fett returns in this third installment of Metroid. Set on the original world of Metroid 1 (NES), this game takes you through various terrains to stop Mother Brain's plans once again. Concidering the setting and the plot, you could almost say it's a remake of the original game, juiced up for the SNES. I personally have no complaints with that concidering this is one of the finest games I have ever played. The graphics are amazing, even with today's standards, and the side-scrolling gameplay was unparrelleled until Castlevaina: Symphony of the Night (PSX).

# 2006
Probably the most superb game I have ever played. This one has everything - depth, strategy, a compelling story, an amazing cinematic feel, questionably 32-bit graphics, and I go on and on. The true test of one's might in this game
is attaining 100% of the items and beating the game in less than 2 hours. 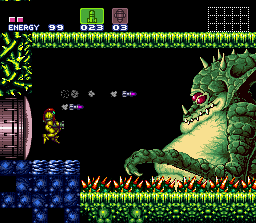