While it's officially a sequel to the immensely popular Chrono Trigger, Chrono Cross is completely its own role-playing game with over 40 characters, a branching story line, and multiple endings. Like its predecessor, the game is about crossing through time and setting things right. This story focuses on Serge's quest for the Frozen Flame, which will give the beholder the power to bend space and time. Serge wants the power to save himself from dying in a parallel universe but, as you can guess, nefarious forces are also vying for the Frozen Flame to suit their own purposes. Chrono Cross features the stylish character designs and wondrous cut scenes that gamers have come to expect from SquareSoft, but the game also has a number of gameplay innovations. Though the battle engine is essentially turn-based, characters don't have to wait their turn to cast a spell or make an attack; battles are moderated by stamina. Also, the repetitive battles with lesser monsters that make so many RPGs sag can be easily avoided because all monsters can be seen on the screen.

Sequel to the legendary Chrono Trigger (SNES). And a rather disappointing one in my opinion... there's almost no character development (I mean seriously, how do you develop like a hundred characters?) and the crappy battle system was the final nail in the coffin. 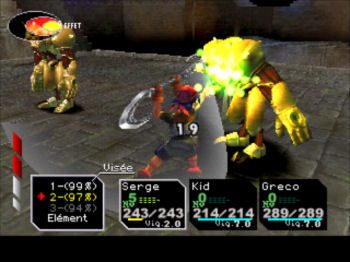